Earl Sweeting and the historiography of African mathematics

Earl Sweeting and the historiography of African mathematics

I started using lockdown to tackle the 6 cubic metres of my mother’s papers – a task put off for the last 5 years. But I was stopped in my tracks at box 1 when I found a postcard of this picture, “African teaching mathematics to the Greeks”. It shows a Black African teaching geometry to the ancient Greeks and is one of a series of murals by Earl Sweeting. The postcard came from the National Archives of Ghana and is unique in my experience in giving full references on the back. Intrigued, I turned to Wikipedia only to find that Sweeting, clearly a noteworthy artist, had no entry. Two days of digging around the internet left me with fragments of information about Sweeting and the history of the pictures, and a heightened appreciation of the power of neglect to silence the past. 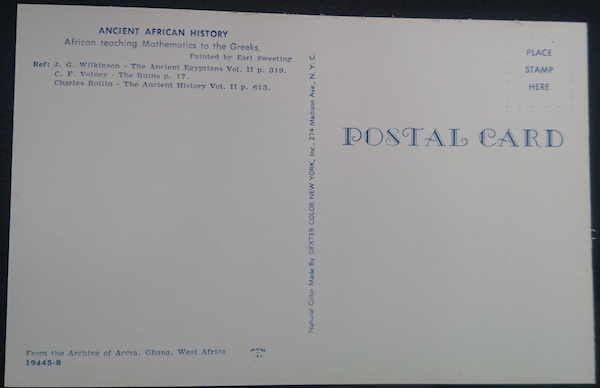 The back of the postcard showing the references

Earl Raymond Sweeting was an African American, born in New York City in 1903. He learnt painting from his father, James [Bearden], and later trained at the National Academy of Design [Osei]. By 1929, while earning his living as a manual labourer, he was involved in Greenwich Village’s vibrant working class artistic community, exhibiting his “exquisite watercolors in miniature” at a party hosted by Luke Theodore Upshure. Sweeting married Ina P. Bell in 1933. In 1957, at the invitation of Kwame Nkrumah, he became the newly independent Ghana’s first curator of fine arts [Valsecchi]. Ina died in Ghana in 1967 shortly before Sweeting’s return to the USA, and three years later he remarried: Ora Williams Mobley was a notable civil rights activist in Harlem (no Wikipedia entry). Sweeting died in January 1981. I have been unable to find any mention of children of either marriage.

Sweeting’s progression from miniature water-colourist to painter of “a series of huge canvasses on the contributions of men little known as Negroes” [ref] was heavily influenced by “Professor” Charles C. Seifert (no Wikipedia entry). A building contractor, born in Barbados, Seifert had amassed a vast collection of books, manuscripts, maps and artefacts to support his research into African history. He believed that dramatic pictures were essential to informing African Americans of their heritage and boosting their self-image, and recruited artists to his cause: Earl Sweeting and Robert Savon Pious (no Wikipedia entry) set up a studio in Seifert’s basement.

Seifert’s belief was to motivate Sweeting for the rest of his life. In the 1950s, like many other African Americans, he evidently came to identify the struggle for civil rights and self-respect with the anti-colonial movements of Africa. The upshot was Nkrumah’s invitation to paint murals illustrating the contributions of Africans to human civilisation for the Headquarters of the Convention People’s Party in Accra. They included African origins for chemistry, medicine, law, and shorthand. Sweeting subsequently reproduced them in his booklet, African History: An Illustrated Handbook.

The paintings aroused derision in the USA: “Surprise! If You Have No History – Invent One” headlined Newsweek, and reproduced 5 of the pictures without permission. Sweeting sued them unsuccessfully for $250,000. But there was more to this incident than outraged Western sensibilities. It was part of a deliberate attempt to discredit African Americans in post-colonial Africa [Gaines]. Their pan-African aspirations and activities were viewed as dangerous to American interests and synonymous with communism (remembering that this was at the height of the Cold War).

Forty years later, some historians remained ruffled. In 2003, Valsecchi began his review of Fauvelle-Aymar et al.’s  controversial Afrocentrisme with an entirely unnecessary digression into Sweeting’s paintings, holding them up as exemplars of the worst excesses of Afrocentric ideology. Other historians were more nuanced. In his own review of Afrocentrisme, Klein described the rapidly changing historiography of Africa in the late 20th century. He questioned the appeal of Afrocentrism, concluding that although it might be outdated in Africa itself, Afrocentrism fulfilled an ongoing need among African Americans. He echoed the sentiment expressed by Spitzer 35 years earlier: “Where … centuries of contempt and insult by whites have yet to be overcome, Earl Sweeting’s kind of history is, sadly enough, still necessary”.

So what was Sweeting’s evidence for Africans teaching the Greeks mathematics? His references were all respected, if outdated, European sources: John Gardner Wilkinson’s Manners and Customs of the Ancient Egyptians  (1837); Charles Rollin’s Ancient History (1730s); and C.F. Volnay’s  The Ruins [of Empires] (1796). All three gave Egypt as the origin of Greek mathematics, citing Herodotus’ account of Thales visiting Egypt to learn geometry. Wilkinson described how Pythagoras, Plato, Eudoxus and Democritus subsequently sought Egyptian knowledge, and pointed to the pyramids and other monuments as testament to Egyptian geometric and measuring ability. He did not deny Greek “genius” but contended that it lay in the superstructure that they built upon Egyptian origins.

Given the classical sources, one might think that an Egyptian origin for Greek mathematics would seem relatively uncontroversial, even in the 1960s. But this was not the case; even today one can easily find sources purveying an extreme Eurocentric view – rational thought arose as a Greek “miracle”, rediscovered by Renaissance Europeans (with a 2-word mention of “Asian learning”), and then developed in the West. Despite reconfiguring our understanding of Egyptian mathematics, the historian, Otto Neugebauer, had also been dismissive: “Egyptian mathematics never rose above a very primitive level,” he concluded. Only in the past 30 years has Egyptian mathematics been re-evaluated by historians such as Jim Ritter and Annette Imhausen.

Sweeting compounded antagonism to his paintings by his interpretation of “Egyptian” as “African”, often portraying the Egyptians as Black. Even those who recognised the sophistication of ancient Egypt were accustomed to thinking of the Sahara as an insurmountable barrier. This allowed them to adopt North Africans as essentially Mediterranean and effectively Caucasian [Diagne]. The later Greek influence in Alexandria further enabled this view: Alexandria was clearly “Greek” and hence European. Mitchell’s pre-Raphaelite painting of the murder of Hypatia is an extreme example.

By 2002, though, Klein claimed that, “Most contemporary students accept that Egypt is African,” continuing, “We can assume that most Egyptians had some melanin in their skin…. the very idea of race has been rejected by physical anthropologists and geneticists.” Popular opinion did not reflect his views. The next year, in 2003, Sweeting’s African History was reissued. This was necessary, stated Linda Bellos, Chair of London Strategic Policy Committee, in her foreword, “because a regime is being re-created in Europe which is sweeping away the human rights of Africans and others designated as ‘people of alien culture’”. It looks as though “race” was merely being superseded by “culture” as the analytic framing of an alleged inferiority.

Since the 1960s, Africa has participated in a world-wide historiographic trend away from grand narratives and towards well contextualised local studies. Often motivated by a desire to improve African maths education, a much richer picture of African mathematics is emerging. Apparently, large numbers of documents await resource and interest to bring them out of archives. Meanwhile, African historians, like those of South America and other less-documented countries (even Scotland, Wales and Ireland – few nations have had the English passion for record-keeping) have to be creative and look more widely for their methods and evidence, drawing on anthropology, archaeology, linguistics and ethnography.

Even as Sweeting was painting, the Ishango bone, arguably the oldest known mathematical object, was discovered in Zaire. It was to provide independent support for his essential claim of the antiquity of African mathematics. In the 1970s Claudia Zavslavsky countered the then-prevalent Western view that African societies could not count beyond 10, when she demonstrated systems that could handle numbers up to a million – including the ingenious “subtraction principle” of the Yoruba of Nigeria - and words for concepts such as squares, square roots and fractions. Under the leadership of Paulus Gerdes and Ahmed Djebbar,  AMUCHMA (African Mathematical Union Commission for the History of Mathematics in Africa, founded 1986), pushed forward the study of African mathematics. Together with Gerdes’ many books, their volumes reproducing 25 years of AMUCHMA newsletters, comprehensive bibliography, and catalogue of African doctorates in mathematics, are invaluable sources for recent work in the history of African mathematics. After augmenting Gerdes’ catalogue on MacTutor with some expanded biographies, Edmund Robertson remarked to me that France had done better than Britain in fostering higher mathematics in its former colonies. This may help to explain why much of the recent literature on the history of African mathematics is in French.

Tracing the story of Earl Sweeting’s paintings has led me to ponder whether there is a risk that history of mathematics could suffer the fate that McCoskey claims has befallen classics – enlistment by white supremacists. McCoskey blames the inadequate response of classical scholars to works such as Bernal’s Black Athena – a direct successor to Sweeting. As a discipline, Western history of mathematics is slowly recognising Chinese and Islamic maths but has yet to engage seriously with the challenges posed by African mathematics. As Klein remarked of historians and Afrocentrists, “More important than proving they are wrong is creating bridges that make dialogue possible.” The rise of ethnomathematics suggests to me that we have further to go in creating these bridges.